Want a fast & smooth switch that both clicks AND works for gaming?

This is my thorough review of the Kailh Speed Gold Clicky switches.

My bottom line: Although the Kailh Gold speed switches use a “click jacket” to produce the clicking noise (similar to Cherry MX Blues, etc), the sound is less annoying (more muted and pleasant) than most clicky switches! The Speed Golds feel great, but the faster activation time is hardly noticeable.

If you like the sound of clicky switches (and enjoy the tactile bump), but also want a slight competitive edge for gaming, then these are the switches for you!

Here are some related switch reviews:

These are definitely one of the more muted clicky switches I’ve used. There’s still a nice “click” sound, but it’s not as jarring or annoying as some other switches (let’s be honest–the mechanical keyboard community HATES Cherry MX Blues).

Let’s dive into what sets these switches apart from other Kailh offerings:

There are really two things that make the Kailh Golds unique:

The Kailh Box Jades, Pinks, and Navys are probably the most popular clicky switches of ALL TIME, and they use a “click bar” mechanism (which produces a crunchier & more metallic click). 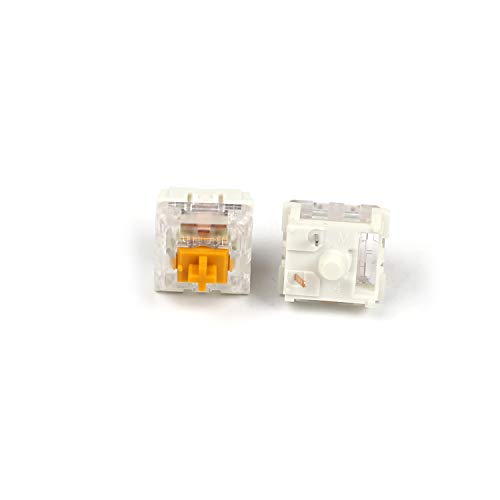 This puts them right in line with most “budget” switches (and slightly cheaper than the Kailh Box clicky switches):

All in all, I think the Kailh Speed Golds are mostly for gamers who enjoy a tiny bit of click, and a tiny tactile bump. It’s almost a linear switch in terms of sound & feel.

See here for our full guide to lubing mechanical switches.

This is a heated debate in the mech world…and personally, I can’t actually tell a difference!

The actuation force (50g) is on the lighter end, and the pre-travel distance is slightly shorter (1.4mm), but we’re still talking about fractions of a second!

Though they might technically be a tiny bit faster, I really don’t think it makes a difference in actual use.

I’ve typed on 75+ sets of switches at this point, so here’s what I think of the Speed Golds.

In a few words, they sound “muted with a tiny click.”

They are RIGHT in the middle between…

The mechanical keyboard at large generally prefers the sound of Kailh Box switches, but there are some who still enjoy the “click jacket” sound (higher and more tappy).

But the Kailh Speed Gold switches have a VERY muted & subtle click.

If you want a little click, but not an overpowering Kailh Box switch, the Speed Golds are it.

The Speed Golds just feel like a “normal” tactile switch. The tactile bump is there, but it’s not super pronounced.

That’s not necessarily a bad thing! It just means you won’t be AS aware that you’re typing on a tactile switch.

Alternatives to the Kailh Speed Gold

You might want to read our “best clicky switches” guide here as well.

Here are some similar switches that you might want to check out:

This is almost the exact same switch, minus the click mechanism!

But given how subtle the click is on the Speed Golds, I honestly think many people wouldn’t be able to tell a difference between the Gold and Copper switches. 😎

If you’re looking for a MUCH more satisfying (and louder) click, try the Kailh Box Jades.

I personally would NOT recommend the Box Jades for gaming though–your fingers might get tired!

The Kailh Box White switches also use the “click bar” mechanism, but these are much lighter and more subtle than the Box Jades or Box Pinks.

If you just HAD to pick a Kailh Box clicky switch for gaming, I’d say go with the Whites.

No, these aren’t a clicky switch (they’re linear), but they are probably the most “gaming switch” I’ve typed on. They’re noticeably lighter, faster, and more smooth than most gaming switches.

They definitely feel faster than the Kailh Speed Golds!

In fact, these are one of my favorite switches period. They’re even pretty comfortable for typing over a long period (most linear switches aren’t the best for this).

Bottom Line: Should you purchase the Kailh Speed Golds?

If you’re into clicky switches, but want something a little more subtle & slightly faster, I think the Kailh Speed Golds are a great option!

They won’t be as pronounced or “clicky” as the Kailh Box switches, but they’re still a very solid tactile switch (and you don’t need to lube them)!

Click here to grab the Kailh Speed Golds on Amazon, and happy clicking!

Should you lube Kailh speed switches?

Although lubing might make Kailh Speed switches a bit more smooth, they sound & feel just fine without it. And if you choose a tactile or clicky switch (like the Kailh Speed Copper or Speed Golds), you’ll need to be extra careful not to lube the tactile bump (else you might as well purchase a linear switch). It’s for this reason that I don’t recommend lubing Kailh Speed tactile switches.

The Kailh Speed switches are great for gaming, but it’s worth noting that the speed increases are actually quite small (and just barely noticeable, if at all). The shorter pre-travel distance (to activate the key press) and lighter actuation force (45-50g of force needed to activate the switch) are technically faster than non-gaming switches, but we’re still referring to fractions of a second and only a few millimeters.

Yes, the Kailh Speed Golds are clicky switches. They use the “click jacket” mechanism (similar to the Cherry MX Blue), which produces a subtle & quiet click. Do Cherry Keyboards Work With a Mac? (Setup Guide)

Cherry is one of the oldest & best brands in the world of mechanical keyboards… But do Cherry keyboards work with Mac computers? Yes, all