Below is my hands-on Kailh Box Pink Review and sound test.

I’ve been on the lookout for a SATISFYING clicky switch, but it’s been tough to find one I’m REALLY happy with.

But I wanted to find a “happy medium.”

Takeaway: The Kailh Box Pinks are a fantastic “medium” clicky switch. They produce a really satisfying “crunchy” feel, but are slightly lighter than the Kailh Box Jades.

I first heard about the Kailh Box Pink switches from a comment on my YouTube channel (and then from Reddit), and figured I’d give them a try. 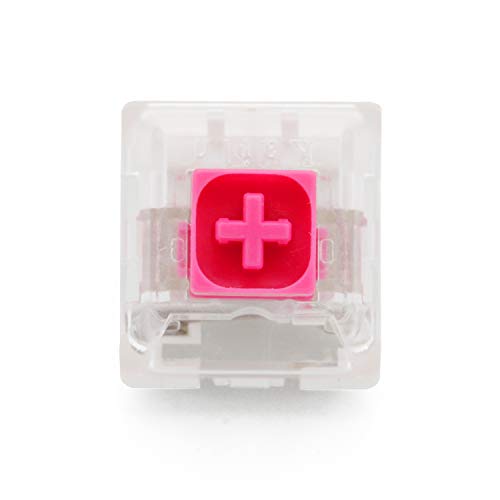 They’re more “crunchy” sounding and substantial than Cherry Blues or Gateron Blues, but not as thick and heavy as the Kailh Box Jades.

Here’s a quick sound test for the Kailh Box Pinks:

Kailh Box Pinks are a type of mechanical keyboard switch.

But unlike most clicky switches, the Kailh Box Pinks (and Box Jades) have a different type of click mechanism–leading to a much more substantial click sound and feel.

This makes them a tad bit lighter than the Kailh Box Jades.

Like all box switches, the Pinks are also dustproof and waterproof, making them a great choice for people who want a durable switch.

Want to learn more? Check out our full guide to mechanical switches here.

After using the Kailh Box Pinks for a few weeks, I can say that I’m really impressed with them.

The 55g of actuation force makes them a bit more smooth than the box jades, but also a fraction louder (not in a bad way).

Both the Box Pinks and the Box Jades have these sounds–but the pinks are slightly less exaggerated (but still WAY more than any other clicky switch I’ve tried).

They’re thick and feel really satisfying to use.

Kailh’s box switches are always super affordable, which I love! At $0.34 per switch, they are a great value for the quality you get.

Conclusion: Are the box pinks any good?

The Kailh Box Pinks are a “happy medium” for thick clicky switches.

They sound and feel way better than Cherry Blues, while being a little lighter than the Kailh Box Jades.

Click here to read our recommendations for the best clicky switches.

Due to this, they sound and feel a bit different than the box jades. The box jades have a heavier, “thunkier” feel, while the box pinks have a slightly lighter, “crunchier” feel.

Yes, the Kailh Box Pinks are fantastic switches, especially if you enjoy a good, “crunchy” click! They are more substantial than Cherry Blues or Gateron Blues, but don’t feel as heavy as the Kailh Box Jades.

At $0.34 per switch, they are also a great value for the quality you get.

It depends on your preferences. One of the advantages of box switches is that they are dust-proof and water-proof (to a degree). The “box” in box switches doesn’t have anything to do with the shape of the stem (which features a box), but rather a separate, tiny box inside of the switch housing.

These box switches often have different components for tactility (and even a different “click” mechanism for clicky switches).

However, some users have found that the addition of “the box” inside the switch does make it more difficult to mod and lube the switches (and assemble the switch in the first place). So it really comes down to your own preferences.)

Check out these other awesome switches we’ve reviewed!