But if there’s one favorite in the mechanical keyboard community, it’s the Kailh Box Jades.

Below is my Kailh Box Jade review, sound test, and comparison 🙂

Big Takeaway: The Box Jade switches are my favorite clicky switch of all time. The unique “click box” mechanism leads to a metallic and crunchy sound, and they feel thick and satisfying. The Kailh Box clicky switches (Jade, Pink, and Navy) are in a class all their own, and at a low price point of $0.50 per switch, they’re a great value too!

I’ve tried DOZENS of clicky switches over the years, and the Kailh Box Jades are my favorite.

And just for fun, here’s a short comparison sound test between the Kailh Box Jades and the Box Pinks (which are lighter, faster, and less stiff, but with a similar sound):

They are PCB-mounted switches, which means that they can be used with any type of mechanical keyboard (without clipping).

Unlike most clicky switches, the Kailh Box Jades (and Pinks and Navys) have a different type of click mechanism–leading to a much more substantial click sound and feel.

This is why they sound & feel so different than Cherry Blues, Gateron Blues, etc.

Like all box switches, the Jades are also dustproof and waterproof, making them a great choice for people who want a durable switch.

Click here to read our recommendations of the best clicky switches.

PRO TIP: The “box” in box switches doesn’t have anything to do with the shape of the stem (which features a box), but rather a separate, tiny box inside of the switch housing.

Related Post: Kailh box vs Gateron: Which is better? 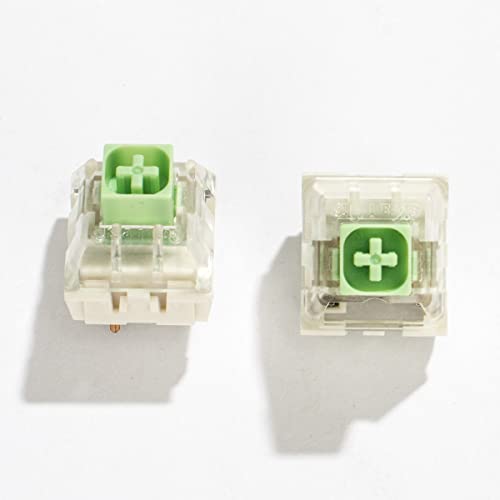 They’re definitely budget, coming in at around $0.50 per switch (depending on the quantity you order, of course).

Considering these are LEGIT the best clicky switches around–I’d say their still a “budget” switch.

Click here to read our full guide on mechanical switches.

As I mentioned in the sound test above, the Kailh Box Jades have a unique click mechanism that leads to a thicker and crunchier sound than other clicky switches.

See the sound test above for more, but I LOVE the metallic crunch. It’s far less “tappy” than Cherry MX Blues. Much more substantial.

It’s worth noting that the Jades sound very similar to the Box Pinks and Box Jades. It’s mostly FEEL that sets these three clicky switches apart.

ALMOST to the point of being too much resistance, and too “mechanical” feeling. Many people prefer the Box Pinks for this reason. They’re less stiff.

That said, I personally like heavier switches, and have never experienced any pain typing on the Jades.

The actuation force is 50g, and the travel distance to actuation is 1.8mm.

Alternatives to the Kailh Box Jades

The obvious switches that will sound and feel similar are the other Kailh Box Switches.

Read our full review of the Kailh Box Pinks here.

The Pink switches sound & feel almost identical to the Jades–but just a tad lighter and faster.

Many people consider this the best of both worlds, but I prefer heavier switches.

The Kailh Box Navy switches are similar to the Jades, but with a slightly heavier actuation force, and are even MORE stiff and thick.

(though the difference is quite slight)

Of course, the Cherry brand of switches is legendary, and for good reason. They’ve been producing quality switches (which cost a premium) for decades.

But now we’re talking about “normal” clicky switches, which do NOT feature the “click bar” mechanism that the Kailh Box switches feature.

They’re not bad by any means–but they’re just not in the same league as the Box Jades–and many keyboard enthusiasts shy away from them for this reason.

All of these “Cherry MX” clones are going to sound roughly the same.

Super affordable, which I love! At $0.50 per switch, they are a great value for the quality you get.

Conclusion: Are the Kailh Box Jades any good?

The Kailh Box Jades are my favorite clicky switch of all time. They have a unique crunchy sound & feel that is unmatched by any other type of clicky switch.

If you enjoy the distinct sound & feel of the “click bar” switches, then I highly recommend giving the Jades a try. And at the price, you really can’t go wrong.

Click here to grab the Box Jades on Amazon!

Although they only have an actuation force of 50g, the Jades feel heavier & thicker than most clicky switches due to their “click bar” mechanism. They generally feel “crunchy and metallic,” which most people prefer over the lighter “tappy” feel of normal clicky switches. Also, the Kailh box Pinks are slightly lighter if you’re looking for something a bit more nimble.

Even though the actuation force is similar (50g for the Box Jade switches and 55-65g for the Box Pink switches), the Kailh Box Jades actually feel stiffer and thicker. They have a very similar sound (thanks to the unique click mechanism in Kailh Box clicky switches), but the Box Pinks are slightly less pronounced and metallic.

This will totally depend on your preference. One of the advantages of box switches is that they are dust-proof and water-proof (to a degree). The “box” in box switches doesn’t have anything to do with the shape of the stem (which features a box), but rather a separate, tiny box inside of the switch housing. These box switches often have different components for tactility (and even a different “click” mechanism for clicky switches). However, some users have found that the addition of “the box” inside the switch does make it more difficult to mod and lube the switches (and assemble the switch in the first place). So it really comes down to your own preferences.)

Here are more of our switch reviews:

If you’re considering the OG Cherry MX switches, read this: Kailh Box vs Cherry MX: Which is better?