When you hear “mechanical keyboards” and “gaming,” most people will recommend a linear switch.

They’re smoother & faster–but what if you like the tactile bump of tactile switches?

Below is my review (and sound test) of the Kailh Speed Copper TACTILE switch.

Overall Review: The Kailh Speed Coppers are light, responsive, and perhaps a tiny bit faster than standard mechanical switches. The tactile bump is subtle (not as sharp as most tactile switches), which leads to a sound & feel much like other speed linear switches. If you want a fast & light switch for gaming, but with a little more stiffness, the Speed Coppers are a great & affordable option.

As somebody who both games and works on my computer full-time, the idea of a speed tactile switch is intriguing!

Here are the switch details:

It’s sad, but there are a TON of keyboard sites that mix up the Speed Copper stats! Here’s the official manufacturing spec sheet:

So what makes the Speed Coppers so speedy? 2 things:

When you put those two together, this equals a light and fast switch–perfect for gaming!

However, the speed increase is tiny, i.e. a fraction of a millisecond! “Gaming” switches might technically be a bit faster, but the difference is barely noticeable.

“Gaming” switches is mostly just a marketing thing in my experience, but that doesn’t mean these switches aren’t fast and fun! 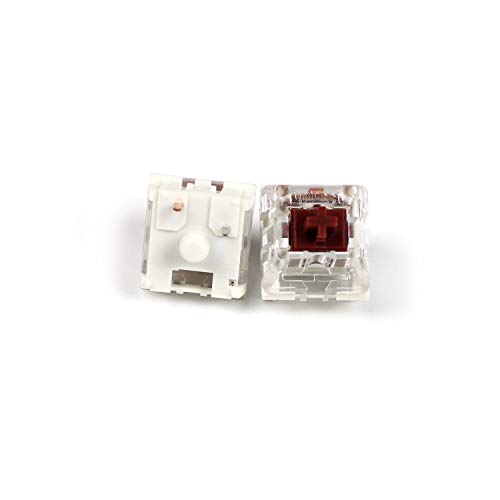 The Speed Coppers are right in line with the other Kailh budget switches–at just under $0.35-0.45 per switch.

Cherry MX Browns & Glorious Pandas (both tactile) will likely run you between $0.70 and $0.90 per switch, for comparison

After typing on these for several weeks, here’s my thoughts on the switch performance:

They still sound “muted” for a tactile switch.

They definitely have just enough of a tactile bump to be a little “clacky,” but not nearly as sharp (or as loud) as the…

(See more info on those switches below! They’re all a bit louder and more clacky than the Speed Coppers)

If you prefer a softer, more crackly sound, the Kailh Speed Coppers are for you.

But since the tactile bump is at the TOP of the keypress (1.1mm pre-travel till it activates), it’s not “slow,” or “buttery.” Just a bit “stiff.”

It’s not a bad thing, but if you WANT to really feel the tactile bump, you should choose a different tactile switch that’s more pronounced.

And do they feel faster than normal switches? No. Not to me! The speed increases are very, very small.

I wrote a full review on the Kailh Speed Golds here–but it’s basically the same switch! (plus the addition of a small clicking noise, of course).

The pre-travel is longer (1.4mm), and the operating force is heavier (50g), but it’s still pretty fast for a clicky switch.

The Glorious Pandas are probably the most “tactile” of the bunch, meaning the bump is crisp and pronounced. You’ll definitely KNOW you’re typing on a tactile switch.

And yes, they’re a bit more expensive, but they also come pre-lubed! (though you can still find the unlubed versions for a bit less money–and lube them yourself).

The Tecsee Sapphires are another MUTED tactile switch, with a softer tactile bump!

The sound can be described as “crackly” (in a good way)!

These are also a bit more expensive, but they also have an incredible sparkly design (not that you’ll see them underneath your keycaps, but alas).

Conclusion: Should you buy the Kailh Speed Copper switches?

At the price point of under $0.40 per switch, the Kailh Speed Copper switches are definitely an easy recommendation! They feel stiff but fast, and have a more muted & softened sound than other louder tactile switches.

If you want a tiny gaming competitive edge and like the muted sound, these are the switches for you!

They’re well made and built to last.

Yes, but it depends on what type of switch you’re looking for! The Kailh Speed switches are well-made, and the Speed Coppers are definitely a bit lighter and faster (though the tactile bump is stiff at the top of the keystroke). However, the sound is a bit more muted and softer than other tactile switches (which could be a good or bad thing depending on your preference)!

Is Kailh a good brand?

Yes, Kailh switches are well-built and generally recommended by the mechanical keyboard community. They’re made by a Chinese firm, Kaihua Electronics, with a good track record for gaming peripherals.