Looking for a great tactile switch that doesn’t break the bank?

I’ve tested dozens of different tactile switches from both Gateron, Kailh, Akko, Cherry, and more–so let’s dive into the comparison.

Before we get to the differences, here are the similarities between the two switches:

Now let’s dive into the differences:

The big selling point of Kailh Speed Copper switches (and “gaming switches” in general) is that they’re “faster” than regular mechanical switches.

👉 Actuation Force (how much force is required to register the keystroke)

Both of these are in the medium resistance range, but the Gateron Browns will have a bit more thickness to the feel.

This is the big difference between these two switches. Speed! However, it’s worth remembering that we’re measuring things in tiny increments. The average user won’t be able to tell a difference!

Yes, the Kailh Speed Coppers might require a TINY bit less effort to press, but it’s not a night-and-day difference.

These two switches are going to mostly sound the same, which one major exception…

Gateron Browns often suffer from switch wobble, meaning the housing can wiggle around a bit. This usually results in a slightly scratchier sound and feel.

A complete beginner might not notice, but if you want the best sound & feel possible, you’ll probably want to install some switch films!

Kailh Speed Coppers don’t have this issue (at least not to the same degree), so they tend to feel and sound better right out of the box.

The Gateron Pros are slightly different, although a bit more expensive.

Both the Gateron Brown and Kailh Speed Copper are widely available, and fall under the “budget switch” category!

First, you can see our full review of the Kailh Speed Copper switches here.

Below are two audio samples that I recorded for each switch, however, it’s worth noting that these were recorded on different keyboards!

However, I still believe that this is a fair comparison for the most part, as both switches sound similar!

Here’s a full review of the Kailh Speed Copper switches:

Gateron Brown vs Kailh Speed Copper: Which is the better switch for me?

Although switches are always a personal preference, you should choose the switch that sounds better, fits your budget, and will be the best fit for your needs!

If you’re a gamer and don’t mind paying just a few dollars more, the Kailh Speed Copper is probably the better switch for you. It’s a fraction of a second faster and easier to press, and will sound & feel better out of the box (since the Gateron Browns have a bit of switch wobble).

On the other hand, if you’re primarily a typist and want to save a few dollars, the Gateron Browns are still a great switch for the money! They will provide a satisfying tactile experience, which can be smooth & satisfying (ESPECIALLY when you add some switch films to the housing)!

To be really honest, I’m not sure I could every recommend the Gateron Browns OR the Kailh Speed Coppers, since there are several other great switches out there that are just as good (or better)!

Here are a few other tactile switches that I would recommend: 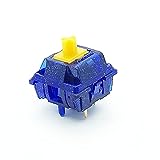 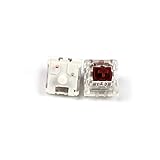 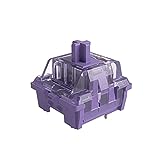 Click here to read our full recommendations for the best tactile switches!

Are Kailh switches better than Gateron?

Yes, although the overall speed differences won’t be that noticeable. Similar to other Cherry MX speed switches, the Kailh Speed switches offer a shorter pre-travel distance to activate the switch, as well as a lower “operating force,” i.e. the force required to register the keystroke. However, the differences are very small, and the average user probably won’t see a massive speed increase in gaming! That said, Kailh still produces quality switches that sound and feel great right out of the box, and their speed switches are pleasant to type and game on.