Sometimes, mechanical keyboards can be a bit too loud…even for those of us who enjoy the clacky & thocky!

And while they do make “silent” switches, they generally feel mushier and NOT satisfying!

Below is my thorough review & sound test for the Kailh Deep Sea Silent linear switches!

Overall Takeaway: The Kailh Deep Sea switches use a unique sound-dampening mechanism that’s different than any other silent switch I’ve tried. This leads to a muted sound, but with just enough character to give a pleasant “crackly and thocky” sound. They feel stiff but fast, and not mushy at all. Personally, I think these are my favorite silent switch of all time.

Let’s dive into the details 👇

Here are some related switch reviews:

Although they’re definitely more silent than traditional switches, I love that they still have a bit of character through that (especially the space bar).

Here’s a bit more about Version 3 of the Kailh Deep Seas:

The older version of the Deep Seas (V1 linear Jellyfish & V2 Deep Sea) had different materials for the housing (nylon), and a few small “errors” that lead to scratchiness. The Deep Sea V3 is made with complete retooling, and has upgraded materials, including composite gold contact leaves.

You can read more about Kailh Box switches in this post.

The shape of the stem is supposed to make the keypress a bit more smooth, though the difference is small.

Most silent switches use a tiny material that attaches to the stem–and mutes sound on the keypress.

In my personal opinion, this leads to a MUCH better sound.

The sound level is technically measured (by Kailh) as ≤ 35db, which is perfect if you’re looking for a mechanical keyboard that won’t disturb others around you. 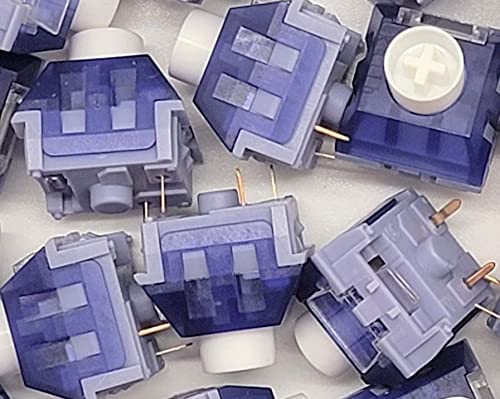 However, that’s still cheaper than other silent switches!

And since I personally prefer the sound and feel of the Deep Seas over any other silent switch, I think they’re definitely worth the price.

After typing on these switches for a while, here’s a bit more about their performance!

Honestly, these are the best-sounding silent switches I’ve used.

They have a good mix of thock and crackle, without being too loud.

And the space bar is actually one of my favorite parts–it reminds you that you’re typing on a mechanical keyboard (by being just slightly louder than it should be).

The VERY light 45g actuation force leads these to feel “short and fast,” but in a good way. They still feel a bit stiff though, which I think might be related to the sound-dampening components, as well as the circular stem design (which is probably heavier than a normal stem?)

But they don’t feel mushy, and that’s key!

They feel balanced and smooth.

Here are the other silent switches I’ve tried (and can generally recommend):

Cherry Reds are the gold standard linear switch, and silent reds are probably the most popular silent switch.

But in my experience, they feel mushy and too light.

Same as the Cherry Silent Reds, except heavier and deeper in sound.

Personally, I think the “mushy” feeling of silent switches is less pronounced in the Black switches (but still not as nice as the Kailh Deep Seas in my opinion)!

Technically, the Ink Blacks aren’t silent–but they’re SO deep, heavy, and smooth that I felt the need to mention them!

They’re one of the quietest “non-silent” switches I’ve tried. So if you’re after buttery smooth and don’t mind a BIT of noise, the Gateron Ink Blacks are one of the thocky-est switches you can get!

Read our full review of the Gateron Ink Blacks here.

Zeal PC produces one of the more popular tactile switches of all time (Zealios), and this is the silent version of that!

It is a TACTILE switch, meaning there’s a small bump in the keypress that lets’ your fingers know they’ve actuated the switch.

The great thing about the Zilents is that you can choose how heavy you want the resistance! They range from 62g to 78g in operating force.

If you’d like to feel a tactile bump but want silent switches, the Zilents are my recommendation!

The Boba U4 is the silent version of the Boba U4T (another massively popular tactile switch).

These are hard to find in stock anywhere, but they’re similar to the Zealios in terms of feel (tactile, with a small bump).

I don’t think the silent tactiles are quite as muted as the silent linears–and definitely not as mushy feeling as the Cherry MX Reds or Blacks!

What is the quietest Kailh switch?

Although Kailh makes several different silent switches, the Kailh Deep Sea (silent linear) switches are likely the quietest. They have a tested loudness rating of ≤ 35db, and feature a different mechanism for absorbing sound than other silent switches. They have a layer of material inside the bottom housing (as opposed to pads on the stem), as well as tiny pieces of material tucked away in the top housing to further dampen sound.

If you’re looking to dampen the sound of your mechanical keyboard, then I think the Kailh Deep Seas are a great choice!

They’re some of the best-sounding silent switches I’ve used, and they don’t sacrifice too much in terms of feel or quality.

And yeah, they’re slightly more expensive than some of the alternatives–but I think they’re worth it 100%.

Click here to purchase the Kailh Deep Seas on SwitchCaptain (my favorite provider).