(and a cheaper alternative to Cherry switches, Boba, ZealPC, and others).

There are a LOT of different switch options and it can be overwhelming to sort through them!

So what are Gateron Milky Switches?

Gateron Milky Switches are made with different materials than normal Gateron switches, which can mean a smoother, less-scratchy keystroke.

Most Gateron switches have a housing that is made of Nylon (bottom) and Polycarbonate (PC) top, but the Milky switches use Nylon for both the bottom and top housing (and the top housing gives a semi-transparent “milky” appearance.

Let’s break these down…

“Normal” Gateron switches usually refers to the “KS-8” model (there are older models for the normal Gateron switch line–but that’s the current one).

The KS-8 features a PC top housing that is a bit cheaper to manufacture, hence the lowered cost. These are the budget-friendly switch you can find just about anywhere!

The PC top housing is more likely to have some switch wobble (which you could fix with switch films), and also sound & feel more scratchy.

Nylon is a less scratchy material for switches in general, and you can find the Gateron Milky switches with a milky bottom OR black bottom housing.

The milky switches will almost definitely be MORE expensive than the KS-8 counterparts, but they’re favored in the mechanical keyboard communities.

Both the Gateron Milky and Gateron Inks are premium switches from Gateron.

We don’t know exactly what type of material the Ink switches are made out of, but they sound and feel great regardless!

Here’s a quick comparison between the Gateron Milky Yellows and the Gateron Ink Blacks (two of the most popular linear switches):

The Ink switches are even more expensive than the milky switches, and can also be difficult to find.

Gateron Pro switches are very similar to other Gateron switches for the most part.

There are a few main differences with the G Pro switch line:

The sound & feel differences between the Gateron Milky, G Pro, and normal switches is going to be very small and subtle.

These are tiny differences for the most part!

Yes, but only a small amount compared to the normal KS-8 switches and the Gateron Pro switches (both of which have clear transparent upper housings).

The Gateron Milky top housings WILL let RGB shine through, but the light will be a bit softer (and more dispersed) thanks to the semi-transparent design.

Also, the RGB will depend on which bottom housing color you choose! The milky bottom switches will let more RGB shine through than the black bottom housing (black absorbs light).

This will depend on your personal preference, but the Gateron Milky Yellow (linear) switches are easily the most popular milky switch. They have a deep “thocky” sound and feel buttery smooth to type and game on. They’re also much more affordable than other community favorites at roughly $0.25 per switch. 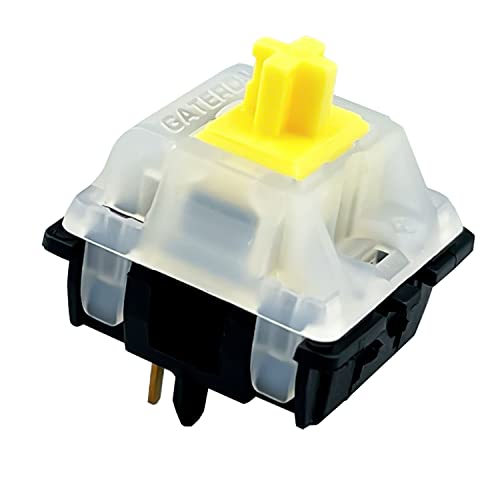 You can read our full review of the Gateron Milky Yellow here.

What Kind of Switches Are Gateron Milky Yellows?

Gateron Milky Yellows are a linear switch, meaning the keypress is smooth all the way down and back up, with no tactile bump. They are a bit heavier then linear red switches, but not quite as heavy as linear black switches. The Milky Yellows are popular among gamers looking for a deep, “thocky” sound.

The Gateron Milky Yellows switches are popular for a reason; they sound nice and deep, aren’t scratchy, and have a heavy, “buttery-smooth” feel. They are great for gaming and typing (although the lack of a tactile bump could become uncomfortable after long periods of typing or working). Since they’re also a budget switch (less than $0.25 per switch), the Milky Yellows are a fantastic linear switch for just about everybody.

What Is Gateron Milky Yellow Pro?

Just to be clear, the Gateron G Pro switches are DIFFERENT than the Gateron Milky switches. There is no “Gateron Milky Pro” switch. Milky switch housings are made from Nylon and feature a semi-transparent upper housing with a “milky” appearance, while Gateron Pro switches feature a polycarbonate top housing that is completely clear & transparent. The Gateron G Pro series is made with an improved mold and offer tiny upgrades in terms of sound & feel.