In the past few years, Roccat has been making some AMAZING gaming keyboards & mice…

But does Roccat work with Mac computers?

Yes, all Roccat keyboards and mice will function on Mac computers. However, Roccat’s software drivers are only available for Windows. Luckily, there are a few minor tweaks you can make in MacOS System Preferences (swapping the modifier keys) in order to set up the keyboard correctly. Additionally, there are other ways to customize your Roccat mouse, etc, for Mac!

Below I’ll dive into the details of two things:

Do Roccat Keyboards Work With a Mac?

Yes, they do. This applies to every Roccat keyboard, as well as their mice, headsets, and other peripherals: 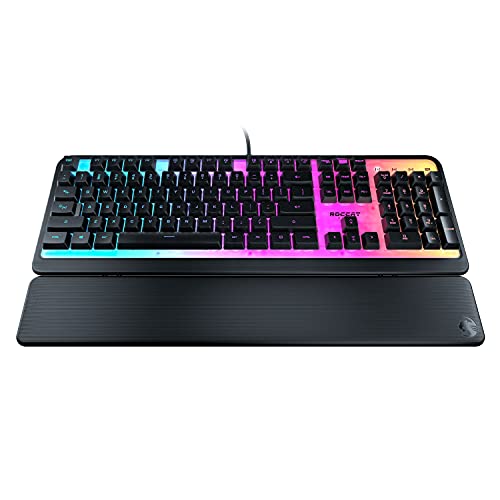 All of these work on Mac.

However, it’s worth noting that Roccat keyboards (and most mechanical keyboards, for that matter) are technically set up for Windows keys by default.

Here’s the main difference between Mac and Windows computers:

And depending on which keyboard you have, there might be some Windows-related keys (scroll lock, pause break, etc) that don’t work on macOS out of the box (but see below!)

All that said, there are a few simple tweaks that can make ANY Roccat keyboard get 90% functionality on any MacOS device.

Let’s get into it.

How to Setup Your Roccat for Mac Computers:

More Tips: Can a mechanical keyboard work on a Mac? Full Setup Guide

Here are the steps:

That’s it! You should now have a functioning Roccat keyboard on your Mac.

No. None of Roccat’s customization software or device drivers offer MacOS versions.

However, if you’re willing to do a bit of work, there are a few workarounds available.

How to Get Roccat Software to Work on Macs (2 Ways)

If you want to use Roccat devices on Apple devices, there are a few options:

1 – Set up your device on a Windows computer first

If you have access to a Windows PC, you can download and install the Roccat software and make changes to your mouse, etc.

Here’s how to install Roccat software on your PC:

After you make your changes on a Windows machine, MOST of your settings will be stored on the physical device. You should be able to simply plug your device into your Mac computer and see most of the updates carry over.

That said, it might not be perfect (this will depend on your Roccat and your computer).

If you don’t have access to a Windows computer, you might try installing the popular Mac software Boot Camp, which allows you to emulate Windows on your Mac computer.

You can learn more about setting up the boot camp assistant here.

You might be able to download the Roccat software to your Mac (via Boot Camp), change the settings on your device, then try using your Mac as normal.

Troubleshooting tips if you experience any problems connecting or using Roccat

If you’re having trouble connecting your Roccat to a Mac, or if some keys aren’t working correctly, here are a few troubleshooting tips:

Reset your external keyboard for your Mac

When you first connect your Roccat to your machine, you should see a popup assistant asking you to press a few keys to determine the layout, etc.

But you can also delete your keyboard preferences file to start from scratch.

Here’s what you do:

You should see the setup assistant again! Follow the instructions and you should be good to go.

If you’re still having issues connecting the Roccat to your Mac, you might either…

There are a few other tips and tricks to making the most out of your mechanical keyboard on a Mac:

Sadly, Roccat keyboards do not support Via or QMK–so the only way to change keybinds or other custom programming is to use Roccat Engine on Mac, or Keyboard Maestro.

Keyboard Maestro is a GAME-CHANGER for any Mac user, especially keyboards that don’t support Via (like Roccat).

You can use Keyboard Maestro to…

It’s an insanely powerful tool. We highly recommend it (then check out some tutorial videos on YouTube, or here’s a great setup guide).

Karabiner is a simple tool for customizing SEVERAL things in MacOs, including…

It’s also easy to install and setup, and it’s free!

Here’s their documentation that walks you through the setup process, etc.

Though we love everything that Roccat puts out, there are several other keyboards that work great for Macs too!

If you’re still shopping for your mech, you can also gauge more of our setup guides here:

The Roccat Kone Pro mouse should mostly work on Macs right out of the box, but if you want to customize the buttons and settings, you’ll need access to a Windows PC (since Rocat software is only available for Windows, but the settings should be saved within the hardware on the Kone Pro and carry back over to your Mac computer).

Is the Roccat Magma Compatible With Mac?

Yes, the Roccat Magma (membrane keyboard) is fully compatible with Mac. However, you’ll probably need to tweak the modifier key settings in System Preferences. Additionally, the Roccat software is not available for Mac, so you’ll need to use 3rd party software to customize the settings.

Do Roccat headsets work on Mac? (like the Elo or Syn)

Yes, the Roccat headsets are fully compatible with Mac devices (though their customization software is not). To set up the Elo or Syn headsets, go to your Mac System Preferences, and then to “sound.” You can then select the Roccat as both an input and output device.

Can a gaming keyboard work with Mac?

Absolutely! Just about any keyboard (mechanical or membrane) will work on a Mac, but you might have to tweak a few settings first (including the modifier keys). This process will be different depending on your specific keyboard, but you can start by changing the modifier keys (Command & Option, specifically) in the macOS System Preferences. With that done, your gaming keyboard should be compatible with most Mac activities.

No, Roccat keyboards will work on both Windows and Mac when you plug in your keyboard (although you’ll want to swap your modifier keys on MacOS under System Preferences). Also, Roccat’s customization software is only available on Windows, so you’ll probably need to use 3rd party tools to customize your keyboard on Mac. If you’re on this page, you either OWN a HyperX keyboard or are looking to purchase one. But sadly–there are some things you need to

SteelSeries is one of the BEST gaming companies on the planet (the SteelSeries Apex Pro is amazing)! But does SteelSeries work with Mac computers? Yes,